Sitting at her desk, waiting for her professor to start the Zoom meeting, Katie Rodeghiero had no idea she was about to lay eyes on her next boyfriend for the first time.

At the time, he was made only of pixels.

The average experience of dating in college had evolved into something new. It involves fear, anxiety, and worst of all, Zoom.

Ariel Becker, a senior film production major, weighs in on how this pandemic has affected romantic relationships:

“It creates a layer of fear, which isn’t good for building intimacy.”

Not that it’s all bad, according to Ashley Weller, Chapman professor of human sexuality.

“COVID-19 has made us step back from the ‘hook-up culture’ we were entrenched in a few years ago and really be mindful of whom we share time and fluids with,” she said.

In the current state of our world, dating often has become more risk than reward. Students have started putting themselves over their dating lives. The Pill Club, a California-based telehealth company, does research into the dating habits of people.

The organization conducted a poll with 6,000 participants last spring, finding that 64% of people plan to be more cautious about dating and hook-ups due to the pandemic.

For some students, the search for love never stopped, even in the midst of the pandemic.

Rodeghiero, junior data science and dance double major, and Arman Siddiqui, a junior computer science major, broke out onto the Zoom dating scene early. They dreamed of the day they could finally meet face-to-face.

“The day she got into California, we went out,” Siddiqui blissfully said.

Rodeghiero was cooped up in her home in Ohio during the pandemic, and Siddiqui was with his family in California.

The two were in the same engineering class, but in different sections. They only saw each other during a Zoom meeting held by the professor at the beginning of the semester.

Then one day, out of the blue, Siddiqui sent Rodeghiero a message on Slack (the communication software the engineering department uses) asking:

“How was that last project for you? I would love to talk about it over coffee sometime.”

The two created a relationship purely over Zoom and Facetime.

They never met face-to-face for the first month. It was purely online.

“It’s interesting. We were texting and calling. We had a virtual communication environment for a good month, if not more,” Siddiqui said.

He continued to talk about their first date.

“It was a nice change of pace for me personally up until that point going out was not something I was doing because of Covid,” he said.

Rodeghiero had a different experience.

“I’m a dance major, I was taking some in-person dance classes, but that was my only out-of-the-house activity,” she said.

The first time the two met face-to-face was their first date. Neither had been out in months. When asked if there was any added pressure to an already stressful moment, Rodeghiero said:

“I didn’t feel like there was a whole lot of pressure; we kinda just felt like we had a rhythm.”

Human connection can be found in unexpected places.

With technology, the gift that keeps on giving, it looks like dating will always have a place, no matter what the world is like.

“It forces couples to be as much of themselves as they can be,” said Siddiqui. “Knowing that you’re just talking to another person. There wasn’t any additional pressure of dressing a certain way or whatever. It was like, you are who you are, and if the other person doesn’t like it, so what? You move on.”

The two met on the first day of orientation week in 2019 and officially started dating that October. When students were sent home in March, the two were not expecting to do long-distance.

“The long-distance was jarring,” Cowan said. “Outside of the relationship, seeing so many people all the time, then to go home and just seeing your parents is such an interesting change. Kaylen and I are both from SoCal, so at least we had that going for us.”

The two got lucky, but there was still intensity.

“It was the anxiety of ‘I’m gonna give this girl Covid,’” said Cowan. “’I’m gonna be the reason she dies.’”

Heavy. But it was the reality at the time.

But both Cowan and Ng are happy, healthy, and in love. But when asked about the single people on campus, everyone said pretty much the same thing.

“There’s definitely apprehension about getting into a relationship, there’s no fun and casual relationships anymore,” Cowan states.

“I never get to meet new people,” Becker said.

Ryan Cartee, junior film production major, was always the social butterfly, which made it easier for her to find potential partners.

“You have to structure facetimes or socially distant meetups. It takes a lot of the fun and spontaneity out of it,” Cartee said.

Miles Shapiro, junior screen acting major is the hopeless romantic of the group, the pandemic has made his life a bit less rose-colored.

“Everyone just wants to hook up. I’m tryna fall in love, y’know,” he said. 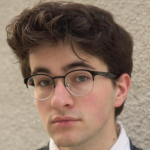