Early this semester, an anonymous creative writing major at Chapman University is tasked to workshop a classmate’s narrative assignments. Wanting an extra pair of eyes on the paper, the student discusses it with a friend outside of class.

But as the two go over the paper, it becomes easier and easier for the student’s friend to predict the plot – citing its similarities with a popular video game. “Oh no,” the student thinks, and after a bit of research, it’s clear: their classmate plagiarized a popular work of fiction.

Well, this is no hypothetical. This happened this spring semester at Chapman to a student who requested to remain anonymous – and it’s no one-off issue. This student has noticed similar ‘bold behavior’ in creative writing classes since coming back from the pandemic.

“It’s been an interesting semester,” the student analyzing the paper said.

After a year-and-a-half of online learning, and in the midst of business professor David Berkovitz’ lawsuit against students for uploading his tests on Course Hero, academic dishonesty has become a greater concern at Chapman University. Aware of how easy it was for students to commit violations online, professors are taking precautions back in-person, from creating new exams to reminding students to keep their word.

According to Dean of Students Jerry Price, fewer than five students have been expelled during his tenure, typically for falsifying diplomas or transcripts. However, suspension has been more frequent – especially during the 2020-21 academic year.

“Because it was really a huge problem during COVID, with online instruction, I bet we suspended somewhere close to 10 students last year,” Price said.

He related that it is more common among lower grade levels to commit academic dishonesty, in part due to stress in difficult courses and because their high school cheating standards differ from college standards.

Some professors understand where their students are coming from.

Bruce Dehning, an associate professor in the George L. Argyros School of Business and Economics, feels such sympathy for students that cheat out of external pressure. But he doesn’t feel that excuses their actions.

“If you were bright enough to get accepted into Chapman, you definitely have the skills necessary to succeed,” Dehning said. “So not using those skills, I’d say, really is the student’s fault, as long as I’ve done everything I can to help.”

Dehning does what he can to help students, while still maintaining academic integrity.

Fearing that his assignments from March 2020 to spring 2021 could have been distributed online, due to the virtual format, Dehning created new assignments from scratch this school year to make sure students don’t get an unfair advantage.

“It takes a lot of extra time, but if that’s what it takes to create a level playing field, then that’s what we need to do,” Dehning said.

Other professors use a similar approach.

John Boitano, an associate professor of French, is less concerned with students distributing previous tests since he creates brand new ones for his French 201 class. Returning to campus, Boitano is using more in-person compositions in his 201 and advanced 300-level classes.

“Students are provided three different prompts and only one is chosen on the day of the exam,” Boitano said. “This way they cannot write or memorize a canned essay.”

These in-person essays ensure students stay off of translation websites, such as Google Translate, which Boitano considers a violation once students translate full sentences, paragraphs or pages. He says it’s obvious when someone uses such services by comparing their writing samples from class with ones they did at home.

“When they do that and they produce this perfect paper, it’s very insulting to the professor. The professor knows that they didn’t write it,” Boitano said.

Rachel Berns, the most recent undergraduate representative, had just as much power and voting privileges as faculty members on the committee.

“I think the purpose of having two students in particular on the board is to ensure that the student is being advocated for in the process,” Berns said.

While she tries to remain unbiased when voting on a student’s case, Berns tries to understand where a student is coming from. She believes that the year-and-a-half of online learning and acceptance of open-note testing might have confused students over what constitutes academic violations back on campus.

“It’s hard to come back and remember that whatever happened for the last year was kind of a fluke,” Berns said.

While the process of meeting with the Committee can be stressful for some, Berns believes it poses a learning opportunity for students as they advance in their academic careers.

“If you do get an academic integrity violation, look at it through the lens of, ‘this is a chance for me to get on a better track, to learn how to find the tools to do things for myself next time,’” Berns said.

However, not all Chapman departments follow the same rules for academic honesty.

For instance, the Dale E. Fowler School of Law has a separate honor code and due process to solve ethical issues if they arise. Thomas Campbell, professor and former dean of the law school, explained that the department works with its own students on violation cases, since many of them will be practicing law in the future.

“That process involves the student designated members of the honor council and it has more of a collaborative process with the students than the rest of the university,” Campbell said.

Campbell said it was difficult to regulate students’ assignments in a virtual setting. However, with classes back in-person, he could return to giving closed-book, proctored exams where the first monitoring is done by his students, themselves.

“They are obliged and I trust that they do follow the requirements and overwhelmingly, in my experience, they have done so,” Campbell said. “Otherwise, it would be where one student brings a complaint against another.”

As for the rest of the Chapman community, it’s up to students to recognize and report cases of dishonesty whenever they see it.

The anonymous creative writing student recently reported their classmate’s plagiarism to the professor, after working with other students to collect evidence over the semester.

“It was not a fun experience,” the student said.

Ultimately, though, the student is glad to have come forward.

“You don’t want the person to think they can get away with this because in the real world, you would get sued, immediately,” the student said.

Overall, the Chapman community implores students to keep themselves educated on what they can and cannot do in classes.

As Dean Price says, “When in doubt, ask. Because I do think some are hoping to get forgiveness rather than permission, and that’s a risky game to play.” 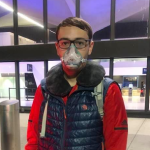