The lights on Wilson Field are bright once again and the doors to the Hutton Sports Center unlocked — but it all came at a cost. Or a cut.

Budget cuts were a necessary evil of the money pit better known as the COVID-19 pandemic. No department knows that better than the athletic department, which took a 50% cut during the 2020-21 sports season, according to Director of Athletics at Chapman, Terry Boesel.

On March 11 2020, COVID-19 officially shut down Chapman’s campus, leaving the administration tasked with adjusting financially for what would become the next year and a half… at least.

By June 31 2020, the start of the new fiscal year, the university had given every department on campus a percentage to knock off of their budget for the 2020-21 year. Within the athletic department, each team was asked to cut their respective budgets by 50%.

“Some teams cut more, because they did not have the opportunity to play due to COVID-19 restrictions in place at the time,” said Raquel Greenberg, business coordinator in the athletic department.

Coaches submitted a prioritized budget list for the 2020-21 school year to the athletic department, and they accommodated accordingly, knocking things off from the bottom up.

Across the board, transportation costs got axed first.

The wheels on the bus go…nowhere.

This alone accounted for a majority of the necessary cuts, but still not enough to meet the 50% requirement. So teams then cut their facilities and professional services for things like referees and umpires.

Then, “each team was allowed to make their own decisions on what was cut after that to help them reach the full 50% budget cut,” according to Greenberg.

Women’s soccer coach Courtney Calderon feels “very blessed” that she was given the flexibility to look at her own budget and prioritize what got cut.

Calderon summarized her budgeting strategy in short: “Need-based stuff got picked to stay and anything that was more of a want was eliminated.”

Head baseball coach Scott Laverty had a similar approach, which he described as the “bare bones” strategy.

“We needed baseballs. We needed hats. We were okay on everything else,” said Laverty, who forewent purchasing some of the normal accessories to accommodate the budget. Despite these sacrifices, he and his squad were still able to compete in Minnesota for the regional tournament late last spring during their shortened season.

Both men’s and women’s golf also saw some tee time in the spring despite their reduced budget.

“We played in five events so it wasn’t unlike any normal pre-Covid conditions other than we couldn’t stay in hotels,” said Ming Lao, head coach of men’s and women’s golf.

The banned hotel stays were not a part of Lao’s planned budget cut, but one instituted by health and safety protocols at the time. However, it ultimately put them in a better position financially.

“Without the hotel stays, even though bus trips were expensive, we saved the amount that I was asked to save,” said Lao, who also had to cut out their new yearly uniforms to reach his 50%.

But every situation, even COVID-19, has a silver living.

The longevity of golf balls allowed Lao to reuse the balls he purchased for the cancelled 2020 season, saving the team from equipment cuts.

Whoever said, “It’s the little things in life” must’ve been talking about the lifespan of golf balls.

And while each team was faced with different hardships, some bigger than others, one thing that everyone had in common was a mutual love for each other.

“All the coaches were fantastic in knowing what we needed to do,” said Boesel.

Calderon, Laverty, and Lao expressed their reciprocity of those same feelings, all highlighting their appreciation for the open lines of communication that everyone involved held.

However Boesel’s proudest moment is not what did happen, but what didn’t.

“Not one person got furloughed or laid off… in the university, not just our department. And that’s unheard of,” he said.

Other Southern California Intercollegiate Athletic Conference (SCIAC) schools were not as lucky, according to Boesel.

Fast forward to now. Pfizer is the world’s new buzz word and Zoom is coming down from its brief hiatus ruling the planet. But where does Chapman’s athletic department stand?

“This year we were still instituted with about a 15% budget cut so we got about 35% restored to us,” said Boesel.

That 35% is strongly diversified among each team.

For Calderon and the soccer team this meant still foregoing air travel this fall. But for Laverty and the baseball squad it gave them an opportunity — they have plans to fly and play in Tucson, Arizona in mid-March 2022.

Things are looking up. Coaches and players say it’s about time. 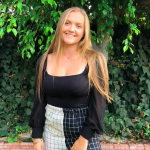