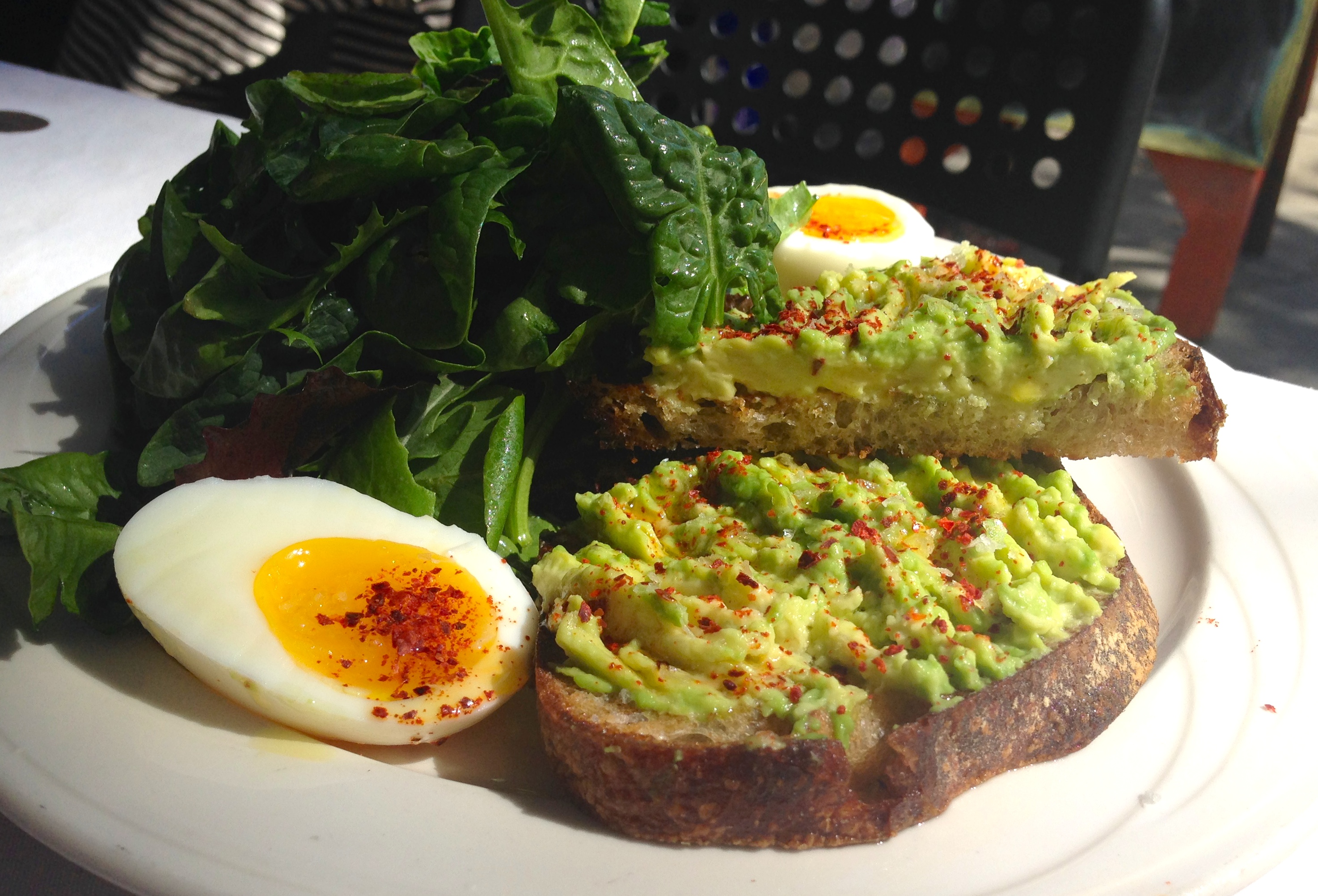 THIS TRENDY TOAST TOPPED WITH AVOCADO AND CHILI FLAKES IS ONE EXAMPLE OF A FASHION FORWARD FOOD FOUND AT KITCHEN 388.

“Where should we go eat?” It’s a question that two Chapman students, Lindsay Cohen-Weingarten and Andrea Hammer, can never decide on.

They go through lists of different kinds of restaurants—Mexican, Italian, Asian, American, a sandwich joint, salads? There are always too many options, and none of them ever sound 100% appealing. Finally they decide, “let’s just go somewhere trendy.”

Food being trendy? Yes, it’s real. Just like fashion, food has trends, but instead of seeing them walk down the runway at Paris Fashion Week, they make their debut in different dishes and restaurants throughout the country.

So what’s trending for 2014? Toast, veganism, and coconuts.

These are the choices of many Chapman students interviewed. Here is a look at each one:

Toast. It’s usually thought of as a breakfast side to eggs, or something to be slathered with pats of butter, jellies and jams, and Nutella, of course. But this year, what was previously known as a simple slice of bread has turned into a chic new snack.

“Toast is so versatile because it is the basis for any type of food. You can make it savory or sweet, it is just a vehicle for any type of flavors you want to top it with and bind together,” said Cohen-Weingarten, a junior public relations and advertising major.

Now what can you do with toast besides pop it in the toaster and cover it with your favorite schmear? The possibilities are endless.

To start there are different kinds of breads to choose from including white, whole wheat, sprouted wheat, sourdough, rye, etc.

Then comes the base, ranging from avocado to different flavors of hummus, to cheese, to all kinds of nut butters.

Finally, top it off with any kinds of veggies, sliced fruits, locks, meats, eggs, or garnishes.

According to Emily Schuman, of Cupcakes and Cashmere, artisanal toast is a welcome trend that she loves to experiment with—enough so that she dedicated a blog post to it.

“It's such a simple concept, and when done right; it turns a basic breakfast into something special.”

Veganism. It is no longer a diet solely for hippies who are hard-core against any sort of animal products. It gained its popularity right after the whole health foods craze took storm, and it caught on quickly.

Usually when any sort of vegan related food was mentioned in normal conversation, people put on a face of disgust and deemed it rabbit food, but now people consider it as an option and find it something interesting to try out.

IF YOU ARE LOOKING TO TRY OUT SOME VEGAN FOODS, YOU CAN FIND VEGAN MAYONNAISE, ALSO KNOWN AS VEGANAISE, AT SPROUTS MARKET.

Chapman alum Kristen Schott, the assistant editor of Riviera Magazine, has seen her fair share of food trends come and go since working hands on with the food sections of the magazine. She elaborated:

“We've definitely been seeing a drive toward healthier, clean foods that are sourced locally, sustainable, and good for our well-being and health. Perhaps it's our connection to the beach and our general connection to the natural environment, but we like to eat foods that make our bodies feel good.”

According to the Huffington Post, statistics show that 2.5% of Americans consider themselves to be vegan in 2014 compared to a mere 1% in 2009. This can also be seen through the increase of vegan and vegetarian accommodating restaurants that have popped up within the last year or so.

Food substitutes such as vegan cheese and desserts, tofu and tempeh, and soy bacon and “chicken” are no longer foreign alternatives, but rather intriguing ways to change up a menu or a weeknight meal.

“As a vegetarian I love this trend because it makes going out to eat more accessible and grocery shopping a lot easier. I have a wide variety of foods that I can now buy since its trendy not because of animal rights reasons,” said Kelsey Dalzell, a junior television broadcasting journalism major.

Coconuts. Long gone are the days when coconuts solely made their appearances in piña coladas or Passover macaroons. This tropical fruit has been found to have a number of health and beauty benefits, and is making its way into homes and restaurants all around the country.

What kinds of coconut products are taking over? Trending this year are coconut oil, milk, creamer, water, flour, shreds; the list goes on and on.

You can find all of these products in almost any health foods super market such as Trader Joe’s, Whole Foods, and Mother’s Market; and even in some traditional supermarkets such as Albertson’s and Ralph’s.

Going hand in hand with the health food craze previously mentioned, the coconut is recently gaining popularity due to its multitude of health benefits. Plus, coconut substitutions have become popular for those who are looking for alternatives to dairy, gluten, and soy products while cooking, baking, or enjoying his morning cup of coffee.

According to Authority Nutrition, the coconut is the new “superfood” of the year in conjunction with blueberries, spinach, and walnuts.

So the next time the question of “where should we go eat” comes up in conversation, don’t be passé and choose an average dinner option. Try one of these new food trends to make an ordinary meal extraordinary.