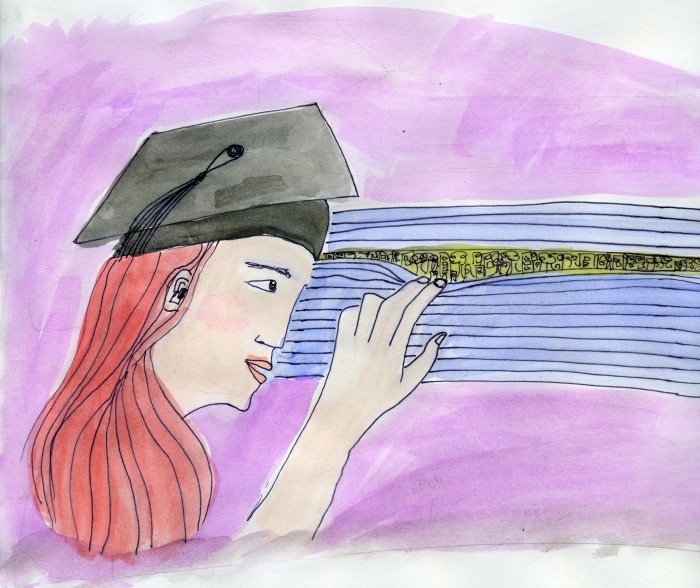 MANY COLLEGE GRADUATES REMAIN UNCERTAIN ABOUT WHAT THE FUTURE HOLDS.

Caroline Plucker stares at the cardboard box perched somewhat ominously atop her dresser. The box is no bigger than a large shoebox, but it holds a lifetime of dedication and perseverance. Inside is Plucker’s graduation cap and gown.

Plucker is a senior strategic and corporate communication studies student preparing to accept her degree during commencement this spring.

“Getting my college diploma was always something I thought of in the future tense. But now it’s a tangible, thing—it’s my reality. I’m ready for the real world, but I’m not quite sure if it’s ready to accept me,” she said.

Welcome to the graduate’s dilemma.

Many college students, like Plucker, start to feel the pull of life’s ultimate tug-of-war as graduation draws nearer. Especially in today’s society, where employment opportunities directly after college are scarce, graduates are torn between entering the workforce and pursuing other options.

“My whole life I’ve been lead to believe I should know exactly what I want to be. Who I want to be. It’s motivation, but it’s also a huge stressor,” said Plucker.

“I remember legitimately wanting to be a treasure hunter when I grew up,” she said.

While she would still love to be a treasure hunter, Bui has chosen the more stable route of going into business law, which she deems to be “sort of like treasure hunting.”

“Our dreams were so big when we were younger. They may seem big now, but I think they’re more limited based on circumstances,” she added.

The discrepancy between expected and desired reality is the driving force behind many current and potential graduates’ real-life anxieties.

Research shows that while most graduates think their college investment was worth it, it’s still increasingly challenging for them to find good jobs. This is motivating many graduates to postpone the headfirst dive into the real world.

A poll of both Chapman and non-Chapman University students strongly supported this research. Respondents typically said they either plan to continue on to some form of post-graduate school or immediately enter the workforce. But a select few have more untraditional plans.

Written responses from the poll gave insight into exactly how future graduates are thinking about, well, the future.

“After graduation? I want to live in Hawaii for a year and work as a waitress. Then start my career,” wrote sophomore public relations and advertising major Maddie Russo.

Russo is just one of an emerging population of outliers who are choosing not to follow the “classic” route to success. Many of her peers share her sentiments, saying that they would support a friend who decided not to immediately enter the workforce.

“More power to them. I feel like the year(s) after you graduate are kind of your last chance to figure yourself out before big bad adulthood creeps in, full force,” wrote an anonymous contributor.

Other reasons respondents gave for taking some time off before beginning a career: traveling, taking care of family matters, and self-exploration.

Not everyone was so gung-ho about their peers straying from the beaten path. Those in opposition responded to the situation of a friend choosing to postpone their career with statements such as:

“Why spend four years of your life on papers, finals, fees and loans not to get a job? It would be a big mistake” and “They are lazy and living off their parent’s money still.”

Katie Ashby, a junior communication studies major agrees, argues that the point of college is to ready yourself for the real world.

“College in itself is a very exploratory experience, so I think by the time we graduate, we should be prepared and excited to start careers. Plus right after graduation is when it’s easiest to find a job since you’re kind of a hot commodity,” she said.

It is clear there is a fine line between differentiating students who find such unconventional post-collegiate paths exciting, and those who find them unacceptable.

Brittany Bui, the aspiring treasure hunter, isn’t so worried about what people think of her post-collegiate plans. She encourages others to realize there’s no one right path for everyone.

“I think it’s amusing when people ask me what I want to be when I grow up. I’m still growing up. And who is to say when that stops?” she said.