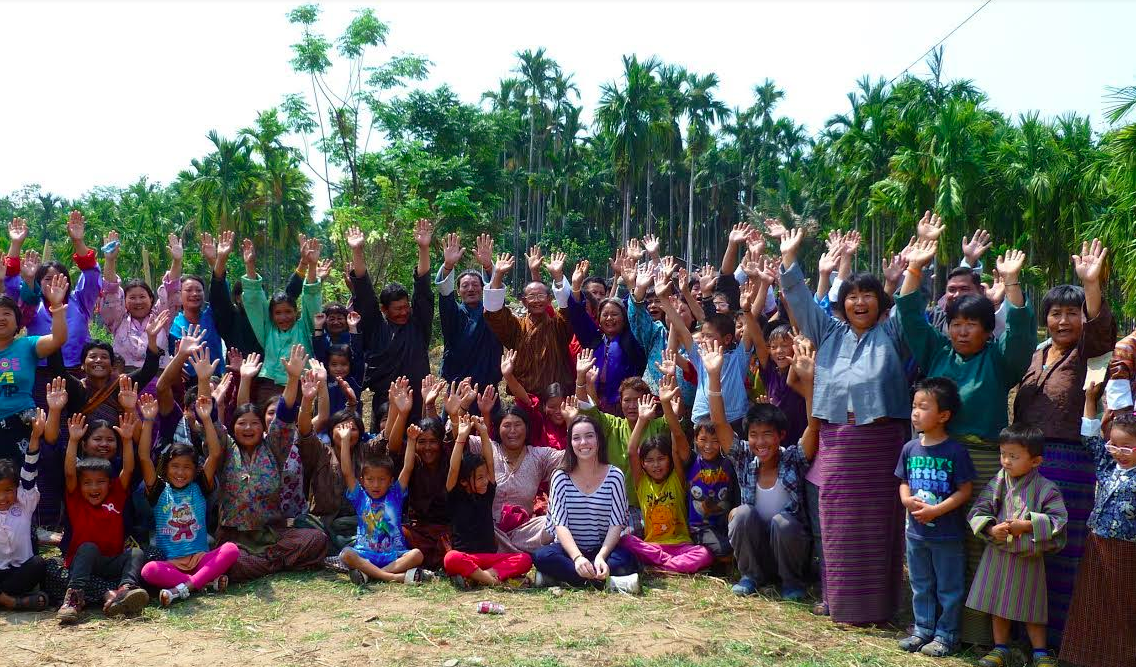 Landlocked between India and China in the Himalayas, the small country of Bhutan has one of the poorest literacy rates in the world. With just 59.5 percent of the people being able to read, libraries are a rare find in Bhutan’s rural areas. After visiting Bhutan at the age of 11, a Chapman peace studies major was inspired to build one.

Sophomore Claire Thomsen played a major role in the building of the Chuzagang READ Center in Southern Bhutan. In the years following her first visit, Thomsen would raise $50,000 for the center.

Bhutan is home to less than 820,000 people, according to Worldometers. Under the influences of Britain and China, the nation was closed off to the rest of the world until the latter half of the 20th century when it joined the Universal Postal Union and the United Nations. It wasn’t until 1999 that satellite television was allowed. About 75 percent of the population practice disciplines of Buddhism and 22 percent practice Hinduism, according to the Bhutan 2014 International Religious Freedom Report.

Thomsen’s love affair with Bhutan began in 2009 when she travelled the world with her parents. A sixth grader at the time, Thomsen was inspired by the kindness and resilience of the Bhutanese people, so when she returned home, she made it her mission to help. As a kid with no fundraising experience and little direction, she connected with Rural Education and Development (READ) Global, a charity which builds community libraries and resource centers in rural India, Nepal and Bhutan.

Since its founding in 1991, the organization has built 104 centers and served 2.3 million people, according to its website.

“(READ creates) economic and educational options for people living in those communities,” she said. “Also we want to make the lives of women and girls much better by shifting gender norms.”

After connecting with READ Global, Thomsen’s fundraising began by writing letters asking for donations to her friends and family.

In her first round of letters she raised $5,000, but her efforts soon plateaued. She set up a fundraising event that raised $10,000 in one night. Once she amassed $20,000, people began to take her seriously and she took her fundraising to the internet.

“People didn’t understand the importance of third world education, especially for women and how much that can change politics within the town and the economy in the town. It just changes everything when people know how to articulate,” Thomsen said.

After years of fundraising, she had raised $50,000, which funded the Chuzagang Library and the Community Center in southern Bhutan.

Ngawang Phuntsho, a Bhutanese development officer for READ Bhutan said the centers symbolize progress and equality for the people in these communities.

“In addition to providing books and resources to the community members, they also conduct capacity building trainings on livelihood skills, women empowerment, literacy skills, health, environment and democracy education, among many others,” Phuntsho said. “It is a one place where anyone can walk in and make use of resources available there.”

The Chuzagang Library contains books for all ages in both English and Dzongkha, the national language of Bhutan. READ Global aims to educate people that may not have had the opportunity to attend school.

“Traditionally, [Bhutanese] libraries were only meant for schools,” Phuntsho said. “As a result they would lend books only to student and not others.”

Thomsen visited the library at 16 after it was completed, and said it was the best day of her life. She has yet to return because it is difficult to receive a visa to gain entry to Bhutan, but her love for its people never faded.

“It’s such a unique (place), it’s kind of hard to articulate. It’s just blissful to be there,” she said. “If I could go back there tomorrow and spend five years there, I would.”