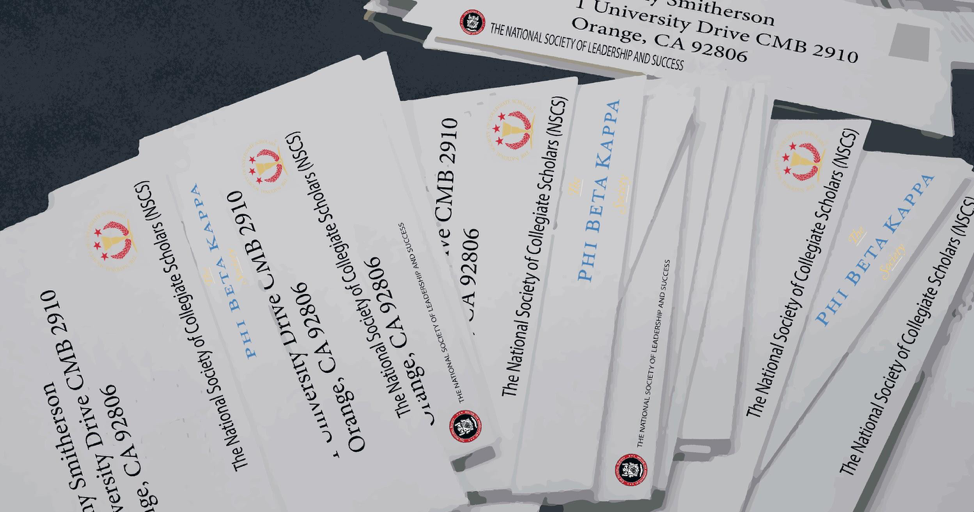 If the price of a college education is steep then junior biochemistry major Ashley Nichols is climbing that mountain with an extra weight on her back, because if you are like Nichols, then you are also paying for a resume line.

An honor society is an extracurricular activity advertised to enhance a student’s future, but is there honor in being part of an honor society?

“I think [honor societies] are a waste of time, because who really cares about them? Maybe in grad school I’ll have a different opinion,” Nichols said.

Students can receive multiple invitations for honor societies, and some join at least one to put it on their resume. With Phi Beta Kappa’s induction into Chapman University this past spring, the importance and weight of these organizations come in question, especially with the looming presence of graduate schools and job opportunities after college.

Nichols joined Gamma Beta Phi after her program advisor said that out of the honor societies that she got invited to — NSLS and NSCS being the other two — Gamma Beta Phi was the best one because the eligibility is more selective. Gamma Beta Phi invites students who are in the top 20 percent of their academic class and who have completed at least 12 hours of coursework for a $70 national fee and local fees that range depending on the university. Chapman’s chapter charges $10 annually.

Nichols served as the Events Coordinator last semester, but she said her only responsibilities were planning induction and booking rooms for meetings. Members earn “points” by attending these events, which go towards the continuation of their membership and a free graduation stole for seniors.

“I don’t feel like what we do in meetings has anything to do with [Gamma Beta Phi’s] values. You go and get the point and you leave,” said Nichols. “You need the points or you go on probation.”

Even though she is not currently seeing the benefits of joining, Nichols does not want to quit because she has already dedicated her time and money.

“I only joined to put it on my resume,” said Nichols. “But now there are other things I want to put on my resume over that, like my research stuff.”

One of the reasons sophomore communications major Stephani Sommer joined NSLS was for the personal recommendation letter, but she says honor societies are not vital to life or graduation.

“I don’t think you should do anything just for a resume, because you’re putting your time and effort into it, but I did research beforehand to find a society that boosts personal skills and learning opportunities,” Sommer said.

Each of the honor societies tout that it is useful for resume-building and recognized nationally, but all five have different eligibility requirements, membership fees, and supposed benefits.

NSLS requires a minimum GPA of 3.5 and a $95 fee. However to be officially inducted, members must go through an orientation event and a leadership training day, watch three speaker broadcasts, and attend three networking meetings. Benefits include a personalized letter of recommendation and access to scholarships, awards and “success coaches,” the website says.

NSCS also charges $95, requires at least a 3.4 GPA and looks for students in the top 20 percent of their academic class. Access to scholarships, internship opportunities and graduate school resources are some of the benefits stated on the website.

Senior theater studies major Matthew D’Arrigo, the president of NSCS, said that there is value in being a member of an honor society that includes community service events and is nationally recognized.

“Because it’s a competitive field, I think [NSCS] sticks out on resumes and applications. It shows you are unique and that you help yourself and your community.” D’Arrigo said.

Nichols said that Gamma Beta Phi has written letters to soldiers overseas, but “it’s all incentivised, not because you want to do it or should.”

Now with Phi Beta Kappa on campus, there is some new competition among the honor societies.

PBK, known as the oldest and “most prestigious” honor society according to the official website, requires students to complete coursework in the liberal arts and sciences and have a successful record in these courses, be knowledgeable in a second language, and complete at least one college-level mathematics, logic, or statistics course. The membership free ranges from $50 to $90. Benefits includes connections, awards, and fellowships, states the website.

Lisa Leitz, a PBK alumna and chair of the peace studies department, was the head of the nominating committee that brought PBK to campus. One of the things that makes the society stand out is its designation and indication of a “breadth of knowledge and skills that a person has” for graduate schools and jobs, she said in a March interview.

“Having a PBK designation on your materials means that a graduate is exceptional in their ability to communicate, problem solve, and rigorously analyze information,” Leitz said. “PBK is an easy shorthand for the top employers and graduate programs to recruit the best candidates.”

Leitz received recognition for PBK when she applied for her first academic position and when she was given the top award at her graduate school. She said PBK was one of the things that put her in a separate category than other people, but it depends on the owner or hirer of a company to know about honor societies.

Although Leitz’s extracurricular landed her a job, it is possible that honor societies do not have any effect on graduate school admissions.

Daphne Jones, the graduate admissions coordinator at California State University, Fullerton, said that honor societies have “no bearings” on what she looks for in applicants.

The Graduate Admissions Office at Biola University bases their admissions on essays, recommendations, and interviews, not honor societies.

“While it is always a ‘plus’ if you’ve been in an honor society, it really does not have much weight in our admissions process.” said Nicholas Perry, the graduate admissions counselor at Biola.

Even though honor societies are not always looked at after college, members of these societies believe that they have the extra edge when it comes to access to opportunities and skill development.

“It’s important for students to be skeptical about the kind of things you’re asked to spend money on or be apart of, and to decide even if they are worthwhile for other people doesn’t always mean it’s worthwhile for you,” said Leitz. “You want to get as far up the chain as you can.”