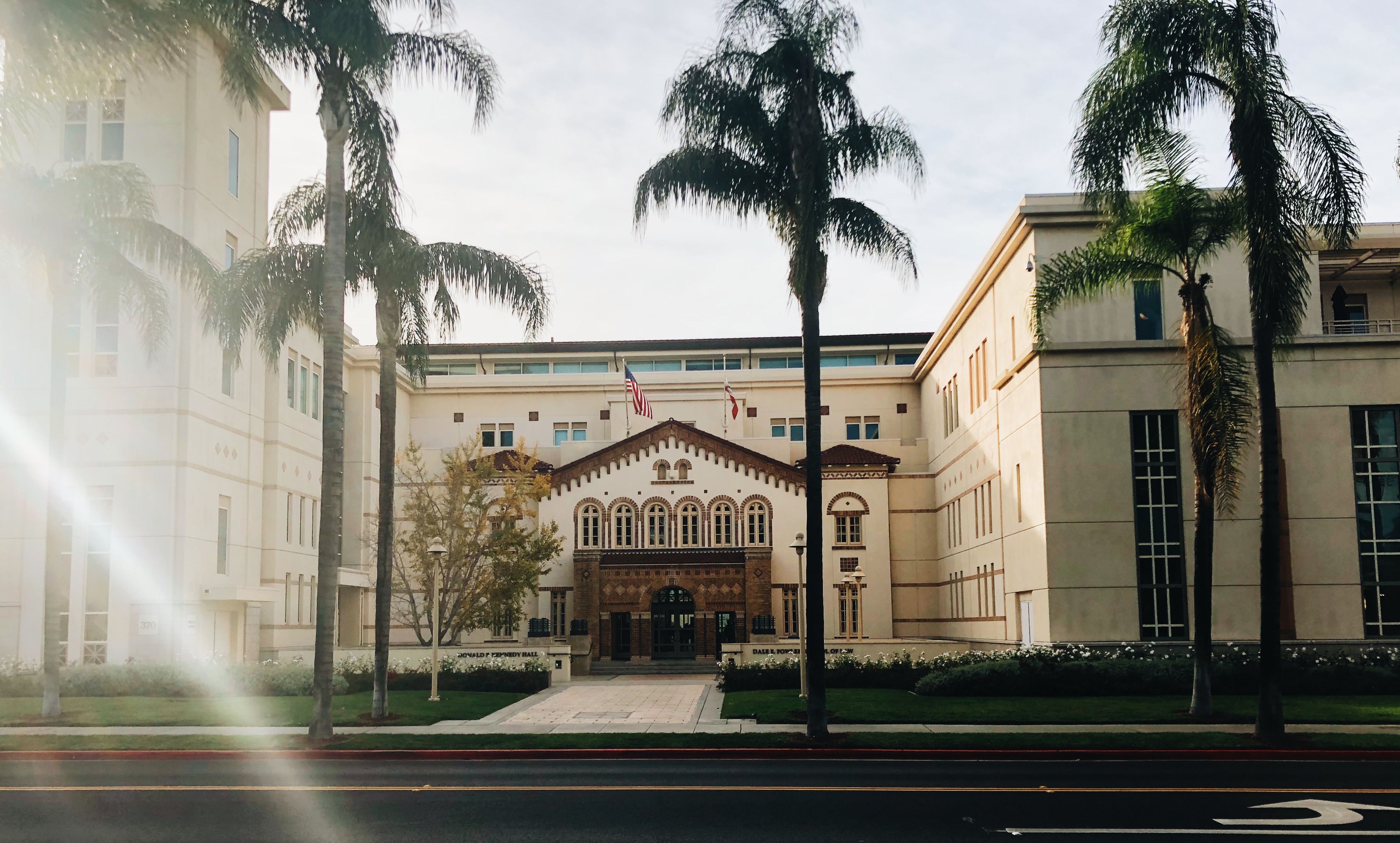 A delivery room in a Los Angeles hospital was congested with doctors and nurses helping Larisa Khromova and her suffering newborn triplets on Dec. 22, 1997. Khromova, a Russian citizen at the time, gave birth to one healthy boy and two girls who were suffering with collapsed lungs, presenting the risk of permanent brain damage or even death. She watched as the doctors rushed to save her babies’ lives, a possibility that wouldn’t have been plausible if she’d given birth back in her hometown of Vladivostok. In Russia, Khromova’s daughter Anastasia who is now a senior business administration major at Chapman, would have most likely died immediately from a lack of adequate care and resources at their local hospital. And if she had survived, murder threats from the Russian Mafia posed risks of death to the family’s. Today the triplets live in Los Angeles with their mother and grandmother, a life that wouldn’t have been possible if the children weren’t granted citizenship under the 14th Amendment.

Each year in the United States, there are approximately 300,000 to 400,000 children born to illegal immigrants, according to legal policy analyst Jon Feere. The current interpretation of the 14th Amendment grants automatic citizenship to all children born on U.S. soil, regardless if their parents are citizens or not. Section 1 of the amendment states “all persons born or naturalized in the United States, and subject to the jurisdiction thereof, are citizens of the United States and of the state wherein they reside.” President Donald Trump threatened to use his executive powers to get rid of automatic birthright citizenship in an interview with Axios on HBO Oct. 30. If he follows through, citizenship would no longer be guaranteed for children whose parents are not. Trump claimed the 14th Amendment is unconstitutional and has been interpreted wrongly, an opinion that is both supported and rejected by other politicians and scholars. The idea has been a topic of conversation in conservative circles for years and can be traced to the work of two top constitutional scholars, one of whom is Chapman’s own law professor Dr. John Eastman.

Eastman was the dean of Dale E. Fowler School of Law from June 2007 to January 2010 and is now the Henry Salvatori Professor of Law, though he’s currently on sabbatical. He earned his Bachelor of Arts at the University of Dallas, Master of Arts and Ph.D. at The Claremont Graduate University, and Juris Doctor at the University of Chicago. Eastman has studied the 14th Amendment for 15 years, the constitution for 40, and has testified before congress three or four times, he said. In 2005, he testified before the House Judiciary Immigration Subcommittee on Birthright Citizenship at a hearing called “Born in the U.S.A? Rethinking Birthright Citizenship in the Wake of 9/11.” He had another hearing regarding immigration with his testimony “The True Meaning of the Fourteenth Amendment’s citizenship Clause” on Apr. 29, 2015, shortly before Trump announced his presidential candidacy. In the testimony, he argues that the 14th Amendment to the constitution has been misinterpreted for the past 150 years. He claims the first part of the amendment sets two requirements for automatic citizenship, the first being “born or naturalized in the United States” and the second being “subject to its jurisdiction.”

“There are two possible interpretations of the phrase,” Eastman said. “One is permanent jurisdiction and the other is partial, territorial jurisdiction.”

The current interpretation of the phrase is permanent, which grants newborns automatic U.S. citizenship and allegiance regardless of their parents’ own, an interpretation Eastman says the modern government and citizens misunderstand.

“Today, we think of ‘subject to the jurisdiction’ as synonymous with ‘subject to the laws,’” Eastman wrote in an opinion article for The Daily Caller. The way it was intended to be interpreted, according to Eastman, is through partial jurisdiction, a claim he backs up with the 1866 Civil Rights Act and the 1872 Slaughterhouse Cases in the article and his testimony.

“The best way I can explain it is if a British citizen visits the United States they’re subject to our partial law,” Eastman said. “They have to drive on the right side of the road and are still subject to our laws but they don’t owe allegiance to the United States,” he explained. “They couldn’t be drafted into the war or tried for treason.”

Shortly after Eastman’s testimony in 2015, Trump, who Eastman said he’s never met, revealed his official immigration proposal, which included ending automatic birthright citizenship. Now, a year and 10 months into his term, he’s planning on using his executive power to change the law and clarify the amendment, rather than going through Congress to repeal or amend the Constitution.

Eastman believes that with an executive order that states the amendment doesn’t apply to undocumented immigrants and temporary legal residents, Trump wouldn’t be changing the Constitution, rather clarifying it.

“An executive order on birthright citizenship would not only be constitutional, it would help clarify a major question in our legal system,” Eastman wrote.

An executive order would pass a law that defines the controversial clause in section one of the 14th Amendment.

“You can definitely do it with an Act of Congress. But now they’re saying I can do it just with an executive order,” Trump told Axios. “We’re the only country in the world where a person comes in and has a baby, and the baby is essentially a citizen of the United States. It’s ridiculous. It’s ridiculous. And it has to end.”

More than 30 countries in the world have this policy, also referred to by the Latin term jus soli, meaning “right of the soil,” according to World Atlas. However, if Trump or Congress ended automatic birthright citizenship, the U.S. would join a worldwide trend of discontinuing the practice over the past 35 years. Some of these countries include: Australia, India, Malta, Ireland, the United Kingdom, New Zealand and the Dominican Republic, according to the Center of Immigration Studies. There’s an array of reasons that the countries ended birthright citizenship, however, a lot of them are a result of concerns that are also prominent in the United States, increased illegal immigration being a large factor.

If an act of Congress is required to follow through with the change, the actual amendment would have to be changed.

Out of about 11,699 proposed amendment changes up until 2016, only the 18th Amendment, which established prohibition, has been repealed by the states, according to the National Constitution Center. Changing specific words, deleting them or repealing an amendment, all have to be passed by an additional amendment. Without the need to change or repeal the amendment, the process would be easier. The chance of a constitutional amendment being repealed would be approximately the same as an 80-year-old person being struck by lightning during their lifetime, according to the National Constitution Center.

However, Trump’s ability to do this through executive order is widely debated.

“You cannot end birthright citizenship with an executive order,” House Speaker Paul Ryan said in an interview with Kentucky radio station WVLK. “You know as a conservative, I’m a believer in following the pain text of the Constitution. And I think in this case, the 14th Amendment is pretty clear, and that would involve a very, very lengthy constitutional process.”

Others such as Kristen Clarke, executive director of the Lawyers’ Committee for Civil Rights Under Law, are concerned about the negative social effects the policy would have on the United States if it’s implemented.

“Aside from being unconstitutional, such an executive order would exacerbate racial tensions, exploit fears and drive further polarization across the country at a moment that calls for the promotion of unity and inclusion,” Clarke said.

The executive order as part of Trump’s immigration policies would intended to reduce the number of unauthorized immigrants in the U.S., however, other scholars believe the order would in fact increase the number.

Research done by the Migration Policy Institute claims that by the third generation of people who are born to two unauthorized parents, a permanent class of unauthorized persons would arise. This would raise the number of illegal residents from the current estimate of 11 million to 16 million by 2050.

“That number is grossly exaggerated,” Eastman said. “People who are here unconstitutionally still have citizenship in their home country, and their children’s children still obtain that citizenship in most countries. It’s not like they’re stateless.”

In most countries, Eastman explained, citizens don’t gain their citizenship by jus soli, but through jus sanguinis, which determines citizenship through blood rather than birthplace. For the few countries that don’t have this law, Eastman suspects those cases would be dealt with by statute through an act of congress.

Trump’s initiative is unclear in its handling of those who have already gained their citizenship through automatic birthright. Eastman believes these people’s citizenship should not be taken away from them.

“I’ve been arguing in Congress that they have to retroactively remain citizens of the United States through the process of naturalization,” Eastman said.

If that’s held true, citizens of birthright like Khromova won’t be in danger of deportation.

“I’m lucky I was born a citizen in the U.S. and I don’t think that right should be taken away from anybody,” Khromova said. “Especially considering it’s part of the Constitution and has been for so long.”

The proposal has sparked turmoil among scholars, politicians and civil rights groups across the country. Eastman’s interpretation of the amendment add to his background, which is already controversial for many. He assumed the role of chairman for the Federalist Society and of the National Organization for Marriage, a group established in 2007 to fight the legalization of same-sex marriage. Eastman wrote a piece the Claremont Institute published in June 2000, “The 20th Century’s Twin Relics of Barbarism,” in which he argued that homosexuality and abortion are barbaric.

“Homosexuality, like polygamy, has for centuries been thought to undermine the institution of marriage and the civil society that rests on it,” Eastman wrote.

His conservative views bring fear of racism, some critics tying the end of birthright citizenship to a return of Dred Scott v. Sandford, the 1857 landmark Supreme Court case that barred African Americans from citizenship.

However, Chapman Republicans’ Ryan Marhoefer disagrees with this association.

“People try to make it about race when it’s not,” Marhoefer said.

The junior business administration major agrees with Eastman’s interpretation of the 14th Amendment, but cautions to “take Trump seriously, not literally.”

Whether or not the executive order is implemented, Marhoefer believes immigrants who defy the law to come to the United States shouldn’t be able to use U.S. laws to protect their families.

Others think it’s a matter of Trump’s morality.

“I don’t think we should have somebody who thinks so minimally of human beings determining who can and can’t live here,” Khromova said.

While scholars disagree on Trump’s authority to use his executive power over this, he hasn’t announced any official plans to put the order in motion, but told Axios it’s “in the works and it’s going to happen.”